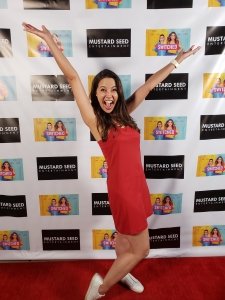 SWITCHED is out on streaming!!

SOOOO grateful to have been a part of this joyful film, directed by John K.D. Graham!   I play “Sarah Evans”, mother with a heart of gold to Cassandra (Miya Horcher).

Summary : Tired of being bullied, Cassandra Evans prays that her nemesis, Katie Sharp (Madeleine Byrne), the queen bee of social media, would know what it’s like to walk a day in her shoes.  Her prayer is answered in an unexpected way when they get “Switched”.

Denise Richards and John Schneider play the mean girl’s parents.  It’s an all around hoot with a great anti-bullying message.

Personally:  ANOTHER reason I feel that this film is important is because the Evans family was color-blind cast with Asian American actors.  Miya Horcher, Daniel Chioco, and I play an all-American family in this faith-based Freaky Friday.  This is so important to me, as Hollywood has been raising the awareness that more films should have diverse casting – simply because we live in a diverse country.  Different families across America can tune in and see multiple faces they can relate to.  This is no small thing.  Whether the intended to or not, Lisa London Casting rocks!! #grateful